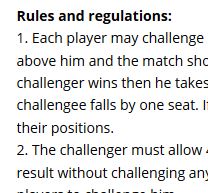 Dear Eleon Garros friend,
Thank you very much for your active involvement, participation and enthusiasm in our tennis
tournaments!
Get ready and fasten your seat belts because another exciting tournament, is
due to begin!
More specifically our new Ladder tourn., 2017-18 will host all players on a
single league initially decided by draw. The draw date & time will be announced on our website
(www.tennis4all.eu).
If interested to participate please confirm by email to kyriacos.kyriakides@gmail.com or by phone /
sms to Menelaos Theodoulou 99-609023, latest by Tuesday 18/9/2016.

Rules and regulations:
1. Each player may challenge an opponent that is ranked up to four seats
above him and the match should be done within five days max. If the
challenger wins then he takes the challengee’s position and the
challengee falls by one seat. If the challenger loses then they both retain
their positions.
2. The challenger must allow 48 hours after the match, irrespective of the
result without challenging anybody, just to give the opportunity to other
players to challenge him.
3. No match can be cancelled since announced in the official website of the
tournament. (www.tennis4all.eu). The unavailable party loses the match
and is walked over (w/o). It is the responsibility of the challenger to liaise with the challengee to find
a commonly acceptable date and time for the match.
4. The challengee in any case has the right to accept or refuse a challenge
(irrespective of the match’s result) for 48 hours after his previous match.
He is allowed, however to challenge anybody (up to four seats above
him), any time, even right after his previous match.
5. A player is declared unavailable for play (and is marked with grey colour)
in cases of travel abroad, injury or any other personal reason that is
declared in time, to Menelaos. Grey players lose one rank position by
default irrespective of the days of inactivity.
6. Grey players are temporarily inactive and should be ignored – for
challenge purposes- until they change status. That means a possible
challenge by number 25 to 20 if f.e, 21 is ‘grey’. The grey player may
challenge 48 hours after his status change, that is, from grey to normal.
7. New players may enter the ladder tournament with the consent of the
O.C and they are placed at the end of the table after they pay the
participation fee that has been set to €25 for all participants
8. 24/12/2017 is the last day before the Christmas recession. Hence the last
challenge will be accepted by 19/12/2017. The first phase will resume once
again on January 5th, 2018 and will end March 31st 2018. Hence the last
challenge of the first phase will be accepted 26/3/2017.
9. After the first phase is finished, the top four players of the draw at the
time, will go on to the next round and players from place 5 to12 will play a
pre-knock out match in a cross manner to decide the last four players of
the official knock outs. More specifically player 5 will play with player 12
for the 5th place of the knock out draw, player six will play the 11th and
so on. The numbers of the players participating in the knock outs may be
revised in due time, if the total participants in the ladder exceeds 25.
10. Participation fee is set to €25 euros. The participants must pay their
participation fee prior to the commencement of the tournament, to any of
the members of the Organizing committee namely Menelaos Theodoulou,
Serghios Savvides or Kyriacos Kyriakides. Most preferable however is to use
our ‘Tennis4all’ bank account for a direct money transfer. A/C number:
Bank of Cyprus a/c: 357003435615
11. The tourn., is a best of three with the 3rd set being a super tie break, i.e a
tie break to 10 points instead of a full set.
Yet, two players may agree in advance that they will play a third set upon
their discretion and of course based on courts availability.
12. Eleon Garros Ladder 2017-18 players, are allowed to play their matches
in any tennis court they wish, provided they will follow the above rules and
communicate the result timely.
13. Above rules and regulations may change any time towards the best
interest of the tournament as defined by the Organizing committee.

How we challenge:
Just send your challenge by sms to Menelaos Theodoulou 99-609023 and
state your name and the opponent you want to challenge. If your challenge is
valid then both, your challenged opponent (challengee) and you (the
challenger), will receive a confirmation sms with the due date the match has
to be completed upon.
As soon as the match is over an sms must be sent as above, from the winner
with the correct score.

Last but not least, many thanks to Menelaos Theodoulou that has accepted to offer his precious
services to the organization and execution of this fascinating
tournament and frequently update our website: www.tennis4all.eu

Good luck to all and may the best player wins!